Above and Beyond Award: This award is given to recognize one or more individuals during the most recent chapter year for extra effort provided on one or more projects or overall to the mission of the chapter.

Gator Award for Sponsor of the Year: Given to the company that’s gone the extra mile to support the chapter.

Langlois/Weigand Award: Goes to an individual who has given extra time and effort to the chapter way beyond simply attending meetings. It is intended to recognize those individuals who have contributed significantly (via their time, efforts, and expertise) over a long period of time both to the Chapter and to the field of safety in general.

President’s Award: Given by the President to an Executive Board member (typically) who has really assisted the President in successfully accomplishing the duties of the position and the goals of the Board. 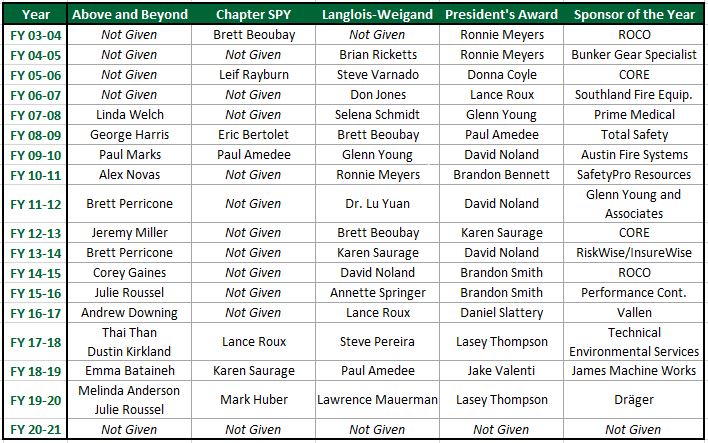 ASSP is a global association for occupational safety and health professionals. For more than 100 years, we have provided education, standards development, advocacy and a professional community to support the advancement of our members and the profession as a whole. Our members are dedicated to creating safe work environments by preventing workplace fatalities, injuries and illnesses. Sound safety practices are both socially responsible and good business, leading to increased productivity, a better reputation and higher employee satisfaction.